Although there are records that indicate that the company existed in the middle of the 19th century and quoted the Falmouth Docks Company for a dry dock caisson as long as June 1860, Samuel Hodge & Sons, Engineers and Ship repairers, of West Ferry Road, Millwall, was incorporated into a limited company on the 17th May 1897 by the owning Hodge family. 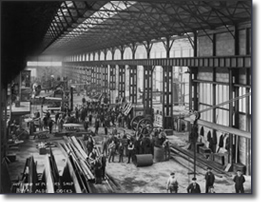 Samuel Hodge became associated with R&H Green Silley Weir, one of the largest ship repairers on the River Thames in London until nationalisation in the early 1970’s. This shipping background led Samuel Hodge into skilled mechanical engineering and machine tool rebuilding. Based in Rainham in Essex, Victor Engineering was formed to undertake major design and maintenance contracts in both the marine and industrial fields.

Under the chairmanship of Mr H A J (Jack) Silley, new activities were added. The company started to manufacture the Victor Pyrate tank cleaning machines in 1952. This was to develop into a business as one of the market leaders supplying many hundreds of ships throughout the world and winning a Queens Award in 1976 for export.

Another new activity for which there was an increasing demand in shipping and other industries, was equipment for the improved preparation of steelwork prior to painting by grit blasting. As a result of an association with the principle company in this field in the USA, Hodge Clemco was formed in 1959 and has become the market leader in the portable grit blasting equipment field. The company also had an investment in a company formed with IMI to produce and market the abrasive materials used in these machines, Wolverhampton Abrasives Ltd. Wolverhampton Abrasives became a wholy owned subsidiary in 2007.

In 1977, Samuel Hodge purchased the Victor Oily Water Separators business from the P&O. The business as Hodge Separators became market leaders in the supply of bilge water separators to meet new IMO regulations and won a Queen’s Award in 1986 for export.

In 1973, Victor Pyrate relocated to new premises in South Ockendon. The paint manufacturing interests in E Wood, who were the principal suppliers of marine paints to the P&O, were sold in 1984.

In 1993 Samuel Hodge acquired Teknequip. The company, based in Harlow, carries out specialist machining work for suppliers to the aerospace industry.

In 1999 Breconcherry was acquired. The company based in Ledbury specialises in tank and vessel washing equipment and had been formed in 1971. The next acquisition for Samuel Hodge was in 2002 when they acquired Richard Llewelyn Brewery Services. The company was rebranded RLBS, in 2004, with the merger of the Teknequip dispense equipment division.

In 2015 Samuel Hodge acquired Dinnington-based Mac’Ants, a supplier of abrasives and blast materials, and one of the world’s largest specialist plastic media manufacturers. Hodge Clemco can now offer an expanded range of abrasives, from plastic medias and aluminium oxides to garnets, sponge and a new efficient & economical abrasive for use in offshore markets.